The Man Who Calls The Shots (Vinyl)

The 8th album from Groovy Uncle sees the band reunited with Scotland’s Miss Modus, who contributed to some of the stand-out tracks from two previous Uncle LP’s. She kicks off this latest offering with the title track, ‘The Man Who Calls The Shots’, a Bond-esque number (reminiscent of ’Your Weight In Gold’ from 2014’s ‘Persuaded’ album) and features heavily throughout.

Highlighting her range and versatility on such gems as the sunny and infectious ‘Hedging My Bets’, the jazzy smooch of ‘Magic Happens’ and the folk tinged ‘Heathen Child’ Miss Modus adds a very pleasing dynamic to the GU sound.

Friends old and new contribute to the album including Ani Graves who provides some ethereal incidental vocals on the wanna be sci-fi theme instrumental, “Guitardis”.

Sharing lead vocal duties, of course, is songwriter Glenn Prangnell who is joined by Medway gypsy jazz quartet, the Lost Revellers on the Harry Nilsson inspired “Sounds A Lot Like Me” and the instrumental closing track, “Return To Guitardis”. 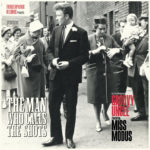