Based on an idea by US musician and writer Mare Rozzelle, New York Letters was originally conceived as a stage play, set during the period 1971-1980 and built around the fictional correspondence of John Lennon. The songs in the play were to be in the form of letters and messages, both to and from John.
The Vague Ideas have created a surprisingly fresh perspective and sonically stunning micro-biopic of John Lennon’s years spent in New York City during the 1970’s.
Mare asked UK based songwriter Glenn Prangnell to write the music for these songs and to chip in with any ideas and suggestions.
The writing process went so well that it was decided to go ahead with putting together an album and think about the play later. And that’s how this album came about.
These twelve original songs are written as a series of letters, notes and messages to and from the people who were important in Lennon’s life. This album will definitely transport you back to the era of solo Lennon with a bit of Beatle-ly bits thrown in for good measure. 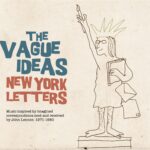